PROGRAM OF THE TOURS

You will arrive in Sarajevo Airport and will be welcomed by one of our staff who will take you to your hotel.

On the tour you will discover why it was built in the first place and why it is so important to visit it. After all this history and buildings it is time to enjoy in nature. Spring of the river Bosnia is the most beautiful and visited park in Sarajevo. There you can enjoy fresh air, numerous water streams, watching birds, fish, swans and ducks. Our next destination is The Tunnel, known as Tunel spasa or Tunnel of Hope. You will see and go through the Tunnel itself, but only for 25 meters. The Ottoman Empire made Sarajevo an important administrative center by 1850.
Baščaršija was built in the 15th century when Isa beg Isaković founded the town and it become and old bazaar and a historical and cultural center of the town. The word Baščaršija derives from the Turkish language. 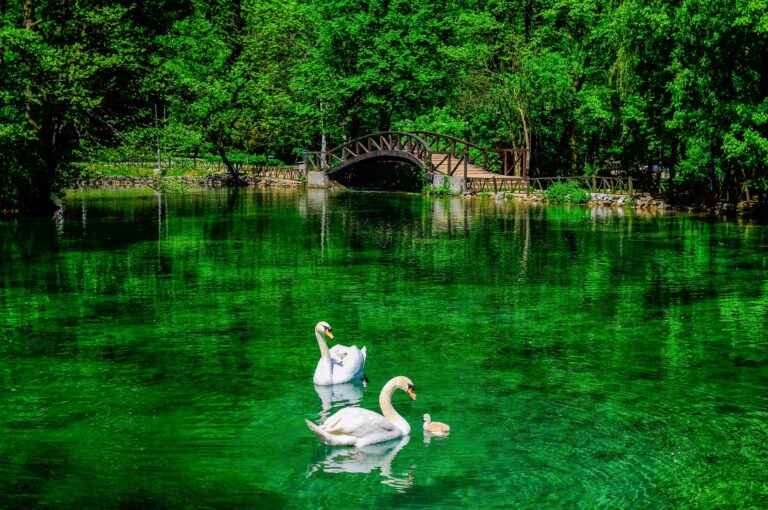 Vrelo Bosne
The pearl of the Bosna river with invigorating air,... 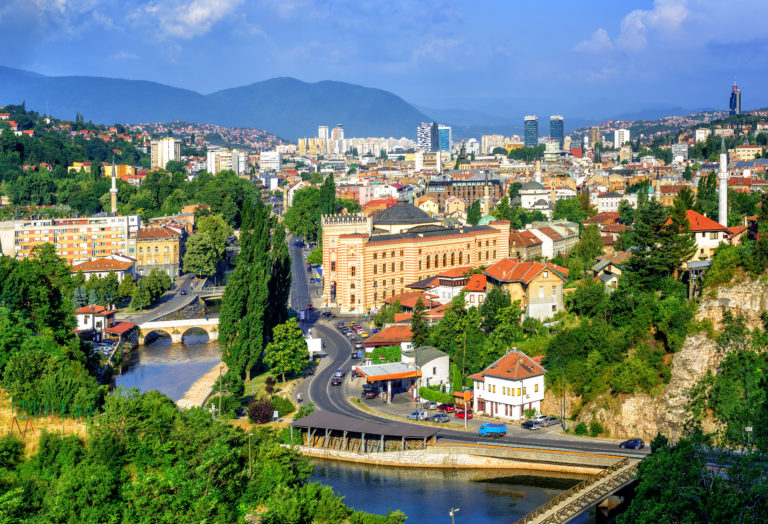 Sarajevo
The capital of Bosnia and Herzegovina situated in the...

Mostar is situated on the Neretva River and is the fifth-largest city in the country. Mostar was named after the bridge keepers (mostari) who in the medieval times guarded the Stari Most (Old Bridge) over the Neretva. The Old Bridge, built by the Ottomans in the 16th century, is one of Bosnia and Herzegovina’s most recognizable landmarks, and is considered one of the most exemplary pieces of Islamic architecture in the Balkans. The Buna is a short river in Bosnia and Herzegovina; it is a left bank tributary of the Neretva. Its source (Vrelo Bune), a strong karstic spring, is near the village Blagaj, southeast of Mostar. Actually, it is best known by famous Buna Spring (Vrelo Bune), one of the strongest springs in Europe and extremely cold water. The Buna flows west for approximately 9 km, starts at Blagaj and meandering through villages Blagaj, Kosor, Malo Polje, Hodbina and joins the Neretva at Buna village. The Bunica river is main left bank tributary of the Buna. 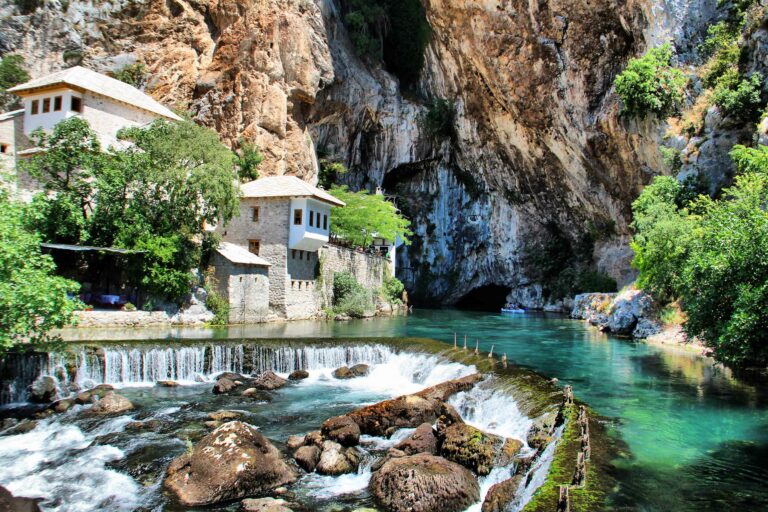 The Buna river spring
Near the old village Blagaj, southeast of Mostar, the... 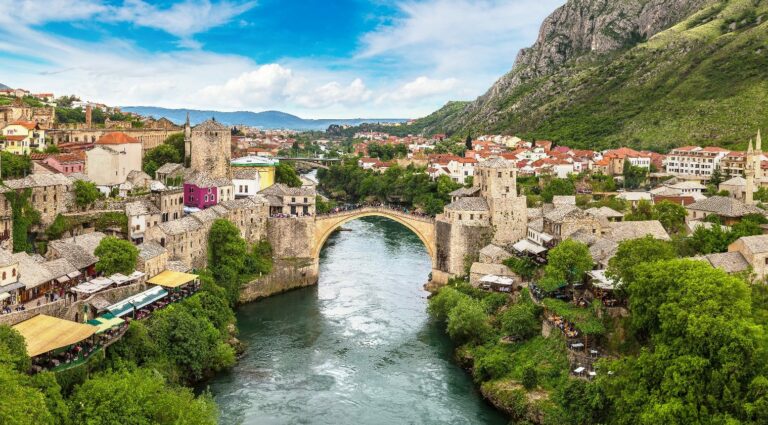 Mostar
A historical and cultural center in the western Herzegovina,...

Travnik is a town and municipality in central Bosnia and Herzegovina, 90 kilometers west of Sarajevo. It was the capital city of the governors of Bosnia from 1699 to 1850, and has a cultural heritage dating from that period. Travnik is located near the geographic center of Bosnia and Herzegovina . The river Lašva passes through the city, flowing from west to east before joining the Bosna river. Travnik itself is built in the large Lašva valley, which connects the Bosna river valley in the east with the Vrbas river valley in the west. Jajce is a town and municipality located in the central part of Bosnia and Herzegovina. The town is famous for its beautiful waterfalls where the Pliva River meets the river Vrbas. It was thirty meters high, but during the Bosnian war, the area was flooded and the waterfall is now 20 meters high. 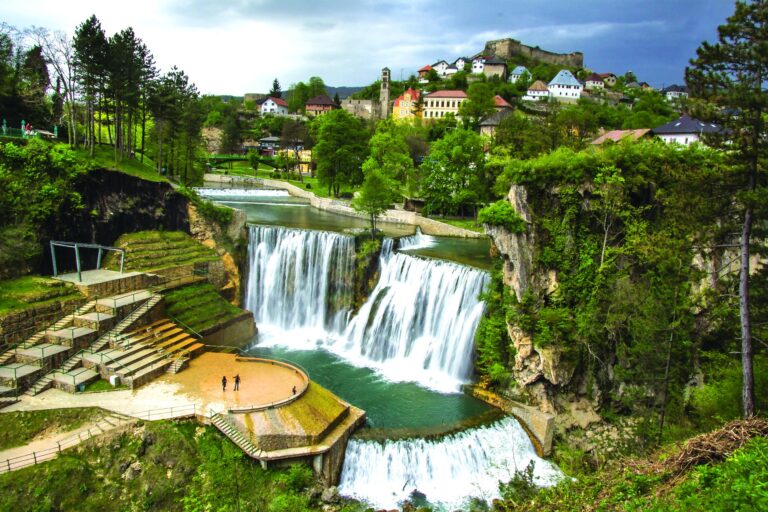 Jajce
The old royal city that constituted the fortified capital... 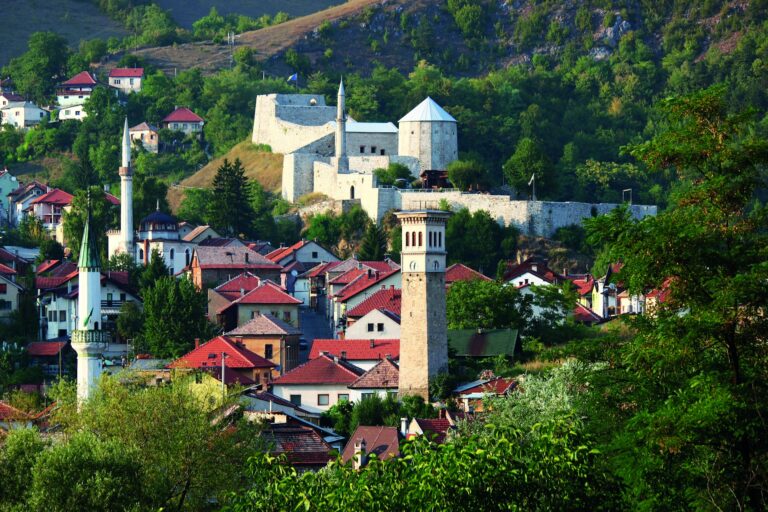 Travnik
The town in central Bosnia where was the seat...

Need Help? Chat with us
Start a Conversation
Hi! Click one of our member below to chat on Whatsapp
The team typically replies in a few minutes.
Talha Ganic
Bosnia Travel DMC Manager